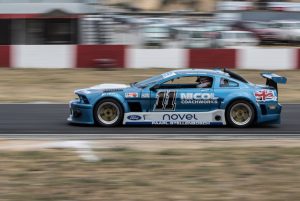 It’s been a fantastic season for British racing driver Stephen Young in the Nicol Coachworks, Novel Ford backed V8 Masters Car, with six race wins and a host of podium finishes he goes into the last round of the V8 Masters Series on December 3rd with a twelve point lead in the Championship from his closest rival Marcel Angel.

Stephen has lead the championship for most of the year, the only change coming after a suspension failure put him out of qualifying before he could even complete one lap in the April round forcing him to start the first race that weekend from the back of the grid.

The championship is contested over twenty two rounds run over eleven weekends, with points issued for both qualifying and the races, the points system is calculated as per the number of starters in each race with one bonus point issued for pole position, a race win and fastest race lap.

The cars which are all identical Mustang bodied purpose built race cars run Ford V8 engines producing 340 Kw of power and all run on massive Avon slick racing tyres, this provides close exciting racing with plenty of overtaking and a fantastic soundtrack from those rumbling V8’s.

Downforce on the car is produced by a massive rear wing and road hugging front splitter, the front runners in this series generally produce lap times at Killarney in the 1m 16’s bracket, this compares favourably with the new and very expensive GTC Touring Car series who are lapping the same circuit in around the 1m 21’s bracket.

Nicol Coachworks have backed Stephen’s car for the last three seasons and are very excited by the prospect of being the championship winners, however as Stephen himself says anything can happen in motor racing and there is still a lot of racing to be done before that dream can be realised.

The championship decider is being held at Killarney Raceway, Cape Town on Saturday 3rd December, with both Stephen and Marcel determined to win it make sure you come along to watch will surely be a close race and an enthralling title decider.